How is matching the right campervan to the right owners like creating a work of art?

As grandparents go, Collin and Sally Garrard are what most people might say, are “cool.”

In fact – believe it or not – their grandchildren actually can’t wait to go away with them in their VW campervan and sleep in the pop-up roof.

After dealing with tents, trailer-tents, and two caravans, Colin and Sally decided they had had enough of towing. So they switched to their first campervan – a 70-plate Volkswagen T6.1 in Indium Grey that was only nine months old when Revolution converted it for them.

They sold their caravan last summer and started their campervan research straight away. They quickly discovered that Revolution Campervans was relatively local to them. After an initial chat on the phone, they took up the offer to go and visit the factory to see the conversion process.

“We didn’t want anything big,” they explained. “We wanted something we could use as our main vehicle that would also fit in most car parks,” they added.

“We knew roughly what we wanted, and the colour, but they helped by showing us the different styles available for the interior. We had no idea there was so much choice,” said Colin. “There are some really lovely people who work there and obviously enjoy their job,” added Sally.

“They had a good supply of vehicles, and we were convinced this was what we wanted,” said Colin. How long did it take from purchase to “van life?” The couple confirmed their order on the last day of March and took delivery of it in mid-June.

Two weeks after getting their Revolution camper, Colin and Sally took it on its maiden voyage to a campsite in Oxfordshire. They were eager to get to grips with how everything worked before taking it on the other short breaks and a two week summer holiday they have in the pipeline.

“It’s just like driving a car,” said Colin. Sally added that: “It’s much more comfortable than I expected.”

“We hope to use it more than our caravan,” they said. Their daughter also camps with her children, so they intend to meet up for lots of weekends away.

Some people might think this is funny, but right after they took delivery, they were compelled to give their campervan a name. At first, they called it Vincent – or ‘Vinnie’ for short. But now they have a Vango drivewaway awning, they amended the name to ‘Vincent Vango’.

“We are more than happy with it. Our top tip for anyone looking for a VW camper is to contact Andy Burgess at Revolution Campervans who will help source the vehicle and help with the design,” say Colin and Sally. 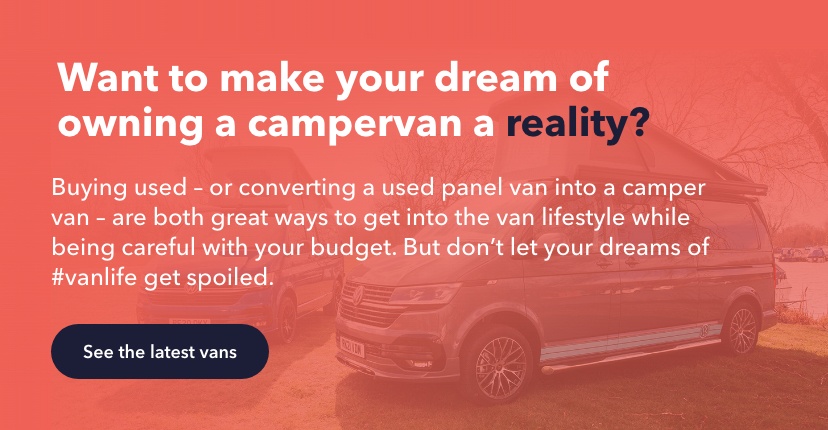